Permanent residency after two years at a podiatry position in Australia

I came across Global Health Source by accident – I was surfing the internet looking at jobs for podiatrists and came across GHS. I emailed with a general enquiry and the response I got was so helpful, personal and encouraging that everything just snowballed from there.

My then partner, now husband, and I had backpacked around Australia in a campervan in 1998, we fell in love with the beaches and lifestyle and vowed we would emigrate, but at that time we had neither skills nor money to go down that road. Eight years later, at the age of 30, I qualified as a podiatrist and emailed GHS to find out what the job situation was like in Australia. Within a month, GHS had found me a job in an area that sounded ideal, the mid north coast of NSW; it had the beaches we love, mountains, forests and was not too far from Sydney.

I was uncertain about the podiatry position to start with, as being a new graduate, I didn’t really want to work on my own, but GHS contacted the employer, explained my concerns, who then advised that I could have as much contact with the podiatry team in the next cluster as I wanted. This arrangement has worked really well, although I didn’t realise then, that the closest team was two hours away! After that ‘worry’ was ironed out, it was all systems go and six months later Russ and I were saying our goodbyes and flying to Australia. 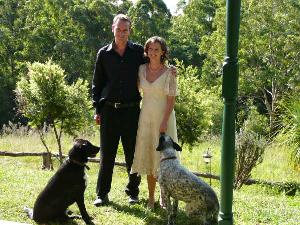 I was sponsored on a Regional Sponsored Migration Scheme; this gave us Permanent Residency on the condition I stayed in the position for two years. GHS were brilliant. They negotiated the contract, travel expenses and walked us through the immigration process. What could have been a very stressful period, ended up being a fairly simple procedure and GHS made it as easy as possible.

Having talked and talked about emigrating we were really excited about going, but the start to our new life was far from ideal, two weeks after arriving in Australia and two days into my new job, Russ ended up in hospital for three weeks. My new employers were wonderful, they explained that family must come first and they didn’t want to see me until he was better, a very different to attitude to previous employers. GHS were also great, phoning and emailing regularly to make sure we were OK. The ‘aftercare’ from GHS has always meant a lot to me and because of that I have recommended them to friends.

We have now been living our Australian dream for almost two and half years, we were lucky in finding our perfect place at the first try. I still love my job, have made some great friends and we are now the proud owners of 102 acres, two dogs, two horses and a cat.